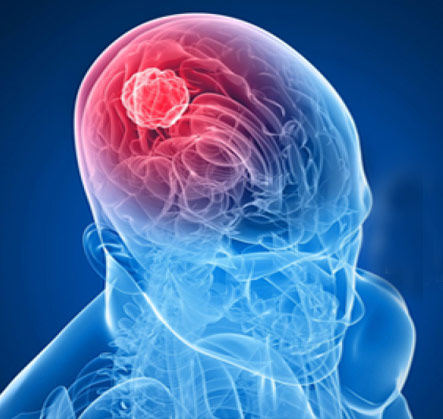 A brain tumor is also known as an intracranial tumor. A brain tumor may be benign or malignant. Benign tumors do not have the potential to metastasize, yet they may affect the functioning of the brain. It is defined as a mass or collection of malignant cells in the brain which began to grow and multiply uncontrollably. It begins to any other place in the body and spread to the brain or the malignant cells may originate in the brain itself. Basically, brain tumors create pressure and affect the function of brain tissues. It can occur at any stage in human.

Pituitary tumors: In these types of tumors, the cancerous cell is grown in our pituitary glands. They affect the normal function of the pituitary gland and as a result secretion of hormones is significantly reduced.

Meningioma: In this type of tumor, the cancerous cells arise from three layers of the thin membrane (called as meninges) which cover the brain and spinal cord. This tumor generally occurs in older people. It is one of the most common types of brain tumor.

Glioma: It is a type of brain tumor, which originate from the glial cells which surround the nerve cells (neurons). Three major tumors occur in glial cells. These are astrocytoma, ependymomas, oligodendrogliomas. These tumors affect the functioning of the nervous system.

Pediatric brain tumor: This is one of the most common solid tumors that occur in children. Treatment and prognosis depend upon various factors including age, location of tumor and stage of the disease. For pediatric tumor, best brain tumor surgeon in Gurgaon should be consulted who is also an expert in performing pediatric neurosurgery.

Ependymoma:Â  This type of tumor develops in the ependymal cells which line the center of the spinal cord and CSF-filled ventricles in the brain. The symptoms include headache, nausea, vomiting, and dizziness. This tumor commonly occurs in children and adults.

Acoustic Neuroma: This tumor occurs in the vestibular nerve (the nerve that connects our ear to the brain). Development of such tumors may lead to tinnitus, and hearing loss. It is also known as vestibular schwannoma.

Brain Metastases: It is also called as secondary brain cancer or metastatic brain tumor. In this tumor, the cancerous cell spread from another part of body cancer such as breast, colon, lung, kidney. The most common site is cerebrum. About 2,00,000 cases of brain metastases are diagnosed in the USA every year.

Pineoblastoma: Pineoblastoma is a fast-growing brain tumor, which is developed in the pineal gland. The pineal gland is responsible for the secretion of a special type of hormones called melatonin which controls our natural sleep-wake cycle. Young children are most prone to Pineoblastoma tumor. This tumor also has a high potential of spreading to another part of the brain through cerebrospinal fluid.

Craniopharyngioma: Craniopharyngioma is a type of noncancerous brain tumor that begins near the pituitary gland and the hypothalamus in our brain. The pituitary gland is responsible for the secretion of several important hormones while hypothalamus controls the release of pituitary hormones. This tumor affects various body functions and may cause loss of balance, hearing loss, vision problems, and hormonal changes. This tumor is commonly found in children with age between 5 to 14 years.

Colloid cyst:Â  It is a slow-growing brain tumor which occurs in the third ventricle of the brain. Because of this tumor, the flow of cerebrospinal fluid gets blocked which results in hydrocephalus (excess accumulation of cerebrospinal fluid). Patients suffering from the colloid cyst may experience symptoms such as headache, vision problems, memory, and concentration difficulties. In some cases, patients become unconsciousness and even go into a coma.

Esthesioneuroblastoma: It is also called as Olfactory Neuroblastoma. This tumor occurs in the upper part of the nasal cavity and may grow or extend in the sinus, eye, and brain. This tumor significantly affects the function of olfactory nerves which are responsible for the control smell. Early-stage symptoms of Esthesioneuroblastoma include loss of smell, frequent nosebleed, difficulty in breathing and nasal obstruction in one side of the nose. Advanced stage symptom is eye pain, headache, and double vision. The olfactory tumor occurs most commonly in teenagers and adults.