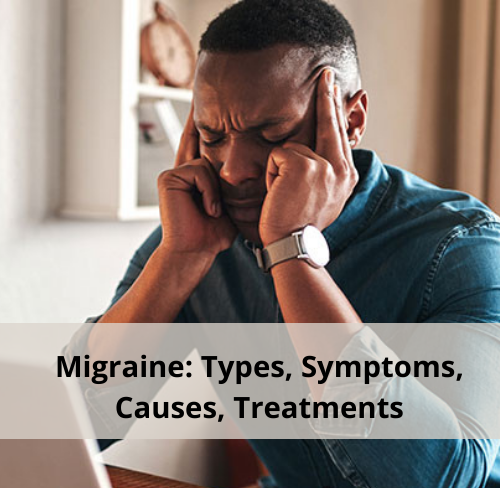 Migraines are normally not life-threatening, although they can be debilitating and painful, as they are just severe headaches.Â

Migraine symptoms may go away with home treatment, but migraines might also necessitate a trip to the emergency room. Hemiplegic migraines are one type of migraine headache that can induce temporary paralysis on one side of the body.

There are a few different types of migraine headaches according to head pain doctors in Gurgaon, and while they all have the same symptoms, some are distinguishable.

(1) Migraines that aren’t accompanied by an aura

One of the most common symptoms is a “split headache,” a throbbing pain on one side of the head. The level of the discomfort varies, but it worsens with physical exertion. Other symptoms, such as those listed above, are also present. The only difference is that there is no aura present.

(2) Migraines accompanied by an aura

Migraines with an aura are frequently very painful. This is referred to as a “classic migraine.” An aura is a warning sign that a migraine is on its way, and it can appear up to half an hour before the headache starts. Auras can be visual, which is the most prevalent, but they can also be sensory or verbal and occur before the commencement of the attack.

– A visual aura can consist of bursts of light, lines, black dots, or geometric lines.

– A sensory aura is characterized by tingling sensations on one side of the face or limb, whereas transient speech difficulties characterize a verbal aura.

Migraine with aura can include limb discomforts such as pains or tingling, vomiting, and the usual symptoms.

(3) Migraine that is severe or “complex.”

This migraine is more severe, with symptoms such as severe pain, vomiting, difficulty speaking or moving, and numbness and tingling in the limbs.

While not a common type of migraine, some people can get migraines during their period and before and after it.

After a migraine attack, which can last anywhere from a few minutes to many hours, one can feel exhausted, confused, and drained for some time.

Symptoms and Signs of Migraine Headache?Â

A headache is known as the most common symptom of migraine. The feeling of pain might be defined as hammering or throbbing. Some individuals have pain in the area of their eye or temple and their face, sinuses, jaw, or neck.

Other migraine headache symptoms include:

The most effective migraine treatments In Gurgaon

Understanding the origin of migraines is an important part of self-care. These can involve stress management, reducing trigger foods, and developing focused sleeping habits, among other things. Before making any dietary changes, make sure you speak with a migraine specialist doctor in Gurgaon.

The following are some of the medical interventions given by migraine specialist doctors:

Pain relievers like paracetamol and ibuprofen, and Triptans, which block pain receptors and nausea medications, stop migraine attacks and prevent them. These relieve minor migraine headaches but should not be used by people with specific medical issues.

While all types of migraines are normally identified by a doctor and can sometimes be self-diagnosed, it’s crucial to remember that various other issues can cause headaches.

If you’ve been having severe and persistent headaches, see a medical practitioner instead of self-diagnosing. Receiving an accurate Migraine treatment in Gurgaon is vital since it eliminates any other potential reasons, allowing for creating a treatment strategy.